Part one of a series looking at the ways the media represents autistic people.

There has been much discussion online and in the news about the connection between the Connecticut school shooting and the fact that he may have been diagnosed with autism. As our families and our community discusses this issue and tries to find a reason for this heartbreaking tragedy, I feel that it is very important to remember the following: There is no connection between planned, violent behavior and an autism spectrum diagnosis of any kind.

The problem at hand though is that the more the news media reports on the possibility that Adam Lanza has Asperger’s the more that correlation will be made despite various efforts to prove that autism does not make a person more violent. In fact far from it, but the genie is basically out of the bottle. It seems that it is convenient to look for a disability diagnosis whenever something tragic happens. That is what happened with the shooting in Aurora, Colorado when there was much speculation as to the diagnosis of James Holmes and it is what is happening here as well.

Autism is not a mental illness; it is a developmental disability. Many autistic people may have emotional regulation problems, which are impulsive expressions of frustration and anger, that are immediate and disorganized. They may lash out with threatening statements or behaviors, but these behaviors are impulsive reactions, they are not deliberate or organized plans. Once the situation has been diffused, the behaviors will stop.  Most of us are law abiding, but the picture that all news media has been painting is that we all are dangerous mass murderers. That narrative needs to be rewritten. What happened in Connecticut required methodical planning of a deliberate and tremendously violent act; this is not typical behavior of an autistic person.

As a journalist, what is most troubling is that the fact that Lanza may have had Asperger’s was mentioned by the news media on the day of the shooting without having been confirmed by anyone. That information came from a police officer who apparently interviewed members of the Lanza family. The officer spoke on the condition that he remain anonymous. The problem with anonymous sources is that often they are misleading and often incorrect or lying. Take for instance the case of Maureen Dowd. Because of an anonymous source that later turned out to be Vice President Cheney we ended up starting a war in Iraq on the belief that Saddam Hussein had weapons of mass destruction. One might think that the news media had learned its lesson. Apparently not. When did ratings become more important than actual facts in reporting the news?
The autistic community is sadly in the uncomfortable position of having to participate in the game of apologetics. One the one hand explaining that autism does not make a person more prone to violence while on the other we have to explain what autism is to people who have been made to feel afraid of us. All the while dealing with an intense level of attention most of it negative and hostile. This has left many of us uncomfortable and a little scared.

I have friends whose children are autistic tell me that schools have tried to have their autistic children expelled and other families have had Child Protective Services called on them for the misunderstood behaviors of their children. In fact that seems to be typical thinking in the neurotypical world. if you don’t understand something that person and anyone associated with it should be castigated. It seems that neurotypical people are more prone to acting on assumptions of fear than on actual fact. I have come to associate neurotypical with being grossly ignorant of autism and making assumptions out of ignorance and fear.  In the first few days after the shooting in Newtown. I have heard people discussing the fact that Adam Lanza has Aspergers despite this not being confirmed by any news organization. Some could be heard saying that they thought having autism made us dangerous. One person went so far as to say that we should be locked in cages. People have also told me that this was the first time they had ever heard of Asperger’s Syndrome, but were afraid of us.

Also statement such as this have been made: 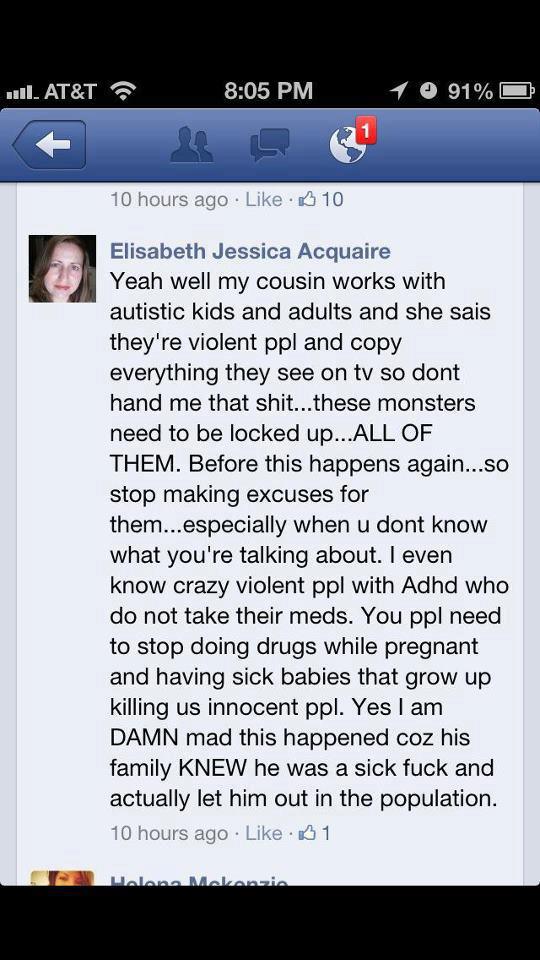 We still have a long way to go it seems. There will be more of this in the future. There will be another shooting and another incidence of societal scapegoating of the autism community.

According to the Federal Bureau of Investigation,  there were 2978 murders in 2011. Statistics for 2012 are not out yet. About 5 of those 2978 people were autistics murdered by their own relatives. Still, given those numbers who is the greatest danger.  If Adam Lanza had Asperger’s, it was more than likely he had a co-morbid disorder as well.  Most likely he had a mental illness and that illness was the cause.  I have Asperger’s Syndrome which is a form of autism. The CDC says that the diagnosis rate of autism is about 1 in 88. If these numbers are correct autistic people make up 1% of the US population. The population according to the US Census in 2010 was 304.745,538 people. If the CDC’s numbers are accurate there are at least 3,508,472 people with autism in the US. The number is likely lower than that but still, that number, if right, is staggering.

As Ari Ne’eman the president of the Autistic Self-Advocacy Network  wrote in Jewish Week:

“While opining on the still unconfirmed diagnosis of the shooter may make for good television, it is hardly a productive way of informing the public. Moreover, there is something horrifically exploitative about announcing to the world that one’s child is a future mass murderer by virtue of psychiatric problems experienced in his preteen years. The son of the writer who penned “I am Adam Lanza’s Mother” (published with his picture and his mother’s real name) returned to school this week surrounded by people who will inevitable look at him as a ticking time-bomb. Thanks to his mother’s choice to use him as a prop in her writing career, he will forever be associated with the worst mass killers this country has ever known. It is hard to imagine what a 13-year old boy could have possibly done to deserve something like that.”

Ne’eman goes on to write that all of the focus on Adam Lanza’s diagnosis is a distraction from more important issues like gun control.

“Not only does the focus on mental illness and disability distract from more productive lines of discussion on how to deal with gun violence, it also plunges into a horrific swarm of stigma and stereotype those of us who deal with the consequences of pundits’ willingness to demonize people with neurological and psychiatric disabilities.”

An example of that distraction Ne’eman discusses the story of the James Holmes who shot up a movie theater in Colorado. After Holmes shot  those people in Aurora. MSNBC’s Joe Scarborough said he was on the “autism scale”.

What Ne’eman wrote is happening to Liza Long’s son as a result of her blog “I am Adam Lanza’s Mother” has also been done to those of us who have Aspergers on a grander scale. The narrative that has been playing out is not only that of a national tragedy but it has also been one that has thrown a group of innocent people under the bus for no better reason than we just happen to have the same diagnosis as Adam Lanza. Like Liza Long’s son people with Asperger’s will forever be associated with the tragedy of Sandy Hook regardless of Adam Lanza’s diagnosis even if it turns out not to be autism.

2 thoughts on “Autism in the Media: Asperger’s Syndrome, Adam Lanza and the (Dis)association with Violence”